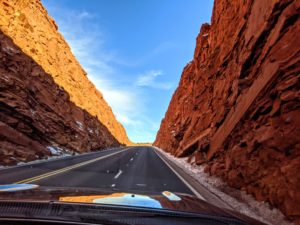 On January 10, we reached our frustration limit and quickly set a plan in motion to resolve what had become a seesaw-effect on paperwork. The seesaw worked like this: Jorgensen Ford sent in the initial paperwork to the Denver DMV. While we were in Denver for four weeks (November 22-December 21), Steve went to our DMV to let them know that paperwork would be coming from Jorgensen. We waited and waited. Steve checked with the DMV to see if the paperwork had arrived. Then, while we were camped in Grand Junction, Colorado, Steve received a call from Jorgensen on December 23 or 24 letting him know that the DMV returned the paperwork. They were requesting additional paperwork. Jorgensen sent paperwork back to the DMV. One of our concerns was that our temporary Utah license plate was due to expire on January 2. We didn’t want to drive with an expired license plate!

On December 26, we decided to stop at Jorgensen as we were traveling between Grand Junction and Hurricane, Nevada. We expressed our concern about the plate due to expire. Steve asked if Jorgensen could reach out to the Utah DMV to see if the temporary plate could have a time extension. They agreed to look into that possibility.

On January 6, Steve called Jorgensen. They said that a time extension wasn’t possible since the truck was going to be registered in Colorado. Colorado could give us an extension if they had received valid paperwork.

On January 10, Steve received yet another call from Jorgensen that again, the paperwork was returned from the DMV. We had just finished having a “town day” in Parker, Arizona to do laundry, Diane to have a haircut, and to stock up on a week’s worth of groceries. We had just arrived at Buckskin Mountain State Park the night before and wanting to shift gears with a group campfire that night and a group hike on Saturday. Instead, Steve called Jorgensen back to request that someone be available at 8 a.m. on Monday, January 13 for us to personally retrieve the paperwork, and 90 minutes later we were in motion with Plan B.

Diane went to the Bucksin Mountain State Park office to cancel the remainder of our 7-night stay. Then she called an RV storage facility in Tucson, who fortunately had a spot for the trailer. She cancelled our Organ Pipe National Monument and Alamo Lake State Park stays, incurring cancellation fees. We cleared our calendar until January 21, when we were due to arrive at Lost Dutchman State Park. We called Stephanie & Shane plus Steve’s Mom Lois to see if we could have overnight stays with them.

That night we checked the weather forecast for the next 10 days in Utah and Colorado. The Arizona forecast was favorable, so we didn’t need to winterize Tranquility the trailer. We nabbed our small suitcases and packed. All of the refrigerator and freezer contents would need to either be thrown out (many of which were just purchased), or we’d need to take them with us. We hitched up the truck to the trailer and prepared as much as we could the evening before in order to get an early start the next morning.

On Saturday, January 11, we were “up and at’em” bright and early packing the last of the toiletries and essentials. Off we went to Tucson, 275 miles. Once at RV storage, we shifted the refrigerator and freezer contents to insulated bags and a cooler. We stopped at Walmart to buy three styrofoam coolers and ice to try to save the food from perishing. Off to a Phoenix hotel we drove, 115 miles. (Oddly, we had just driven I-10 through Phoenix 90 minutes before with the trailer!)

On January 12, we drove from Phoenix to Richfield, Utah, 480 miles. We arrived after dark, filled up the truck with fuel, and hit the sack. Fortunately, we had a big lunch on the late side (Navajo Tacos at Cameron Trading post, Carmeron, AZ – delicious), so fruit and crackers sufficed for dinner.

On January 13, we were at Jorgensen Ford at 7:50 a.m. Despite our best attempts to make sure someone would be there with the paperwork at 8:00 a.m., it didn’t happen. It was not until 8:45 that we were on our way. Our first stop was to get a cup of hot coffee! While we enjoy Starbucks, we also like to support local coffee shops. As luck would have it, there was an independent coffee shop on our way out of town. We handed the barista our cups and she disappeared for quite some time. Hmmm…this sure was taking longer than we expected. When she came back and handed us our to-go cups, she said, “This is from a fresh pot so nice and hot!” As we drove down the main drag towards I-70 and sipped our coffee, guess what? It wasn’t even lukewarm. Did we turn around? Nope! We decided that it was time to leave Richfield, Utah in our rearview mirror with intentions to never return.

Richfield to the Denver DMV location is 475 miles! This would be a long day. We kept our eyes on the weather radar because there was a winter storm seemingly parked over Vail Pass. At one point via Denver 7 News’s Facebook post, we read that Vail Pass was closed. We verified this through the Colorado Department of Transportation website. Knowing when these storms hit and roads close, motorists need to seek hotel rooms, we were able to nab a room in Glenwood Springs. Though we were stopped short of our goal, it was nice to relax for an afternoon. We enjoyed a late lunch/early dinner at Smoke Modern Barbeque. 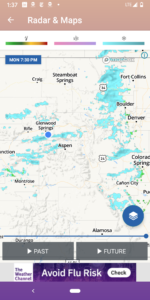 Stay tuned for Part 2 of Our Wild Vehicle Registration Caper.

Between Christmas and New Years we spent a couple nights in Valley of Fire State Park, Nevada, about 60 minutes northeast of Las Vegas. For some amazing pictures, check out the park’s website at vofsp@parks.nv.gov. While you are there, check out the trail map. It is the most amazing trail map I have seen!

The camping is first-come first-served (72 sites with only a handful of sites having electricity and water). The campground was full the two nights we stayed there.

We picked up the “What to do in a day” flyer from the visitor center and did our best to be tourists.

We hiked the White Domes Loop on day one. 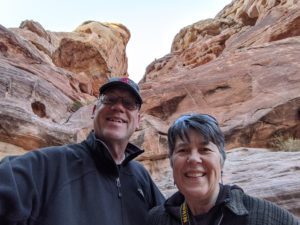 The next day we hiked the Fire Wave. It is not on the trail map because it is not really a trail. It is a short hike from Parking Area 3. I popped the colors on this a bit, but the reality is so much better than the photo! 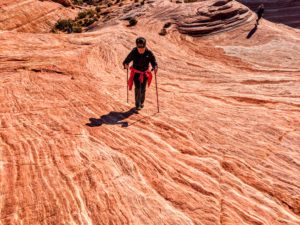 And Rainbow Vista. At the top of the hike we found this Compass Barrel Cactus just begging to be in the picture. 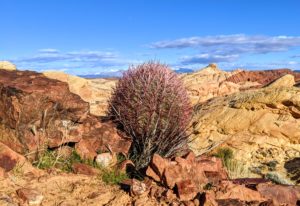 And Mouse’s Tank. Side note, until we stayed at Hueco Tanks State Park in Texas I did not know that a tank was the name for a natural collection point for water. The tanks I have seen since then have all been depressions in the rock (usually sandstone) where water collects during a runoff. So, the tank was not much to look at. But, along the way there were petroglyphs and a side trail that gives you a view of Fire Canyon. 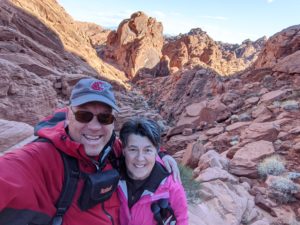 On the way back, we snuck through a small slot and found this small canyon/valley. It was a wonderful, peaceful spot that we had to ourselves! And yes, the rocks were worth the picture! 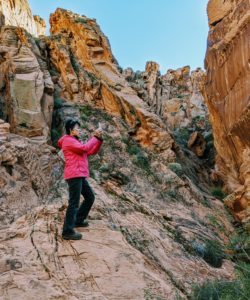 All beautiful. Even though the weather was comfortable and the hikes were short, the sun was out, the air was dry, and bringing water is a definite must.

Those were the last hikes of 2019. As a dear friend and wise woman told us, “Keep moving!” That’s our plan!